All this was accompanied by terrific lightning and thunder above, and violent shocks of earthquakes underneath.

The cloud of ejecta, carried on by the wind, exented itself toward west and south with the result that we saw already some stones fall close to our shore. I, therefore, shouted to all those who were still in the town to take to flight and we all ran off in a hurry; otherwise we would have been engulfed on the spot; as the waves of the angry lake began already to flood the houses nearest to the beach. We left the town, fleeing this living picture of Sodom, with incessant fear lest the raging waters of the lake overtake us, which were at the moment invading the main part of the town, sweeping away everything they encountered.

On the outskirts of the town, I came upon a woman who was so exhausted by her burden of two little children and a bundle of clothing that she could proceed no farther. Moved by pity, I took one of the taddlers from her and carried him, and the little indio who has been wailing while in the arms of his mother, stopped short when I took him into mine and never uttered a sound while I was carrying him a good piece of the way.

All was horror during those three days Having reached a secure place on elevated ground at a distance of about half a league 2 kilometers from the town, we halted in a hut to rest a little and take some food. From this spot the volcano could be contemplated with a little more serenity of mind. It still continued in full fury, ejecting immense masses of material. Now I also observed that the earth was in continuous, swaying motion, a fact which I had failed to notice during the excitement and fear of the flight.

Shortly afterwards the volcano suddenly subsided almost suddenly; its top was clear and apparently calm. We, therefore, returned on the following day, the 29th, to the town with the intention of surveying the havoc wrought during the preceeding night. The 29th had dawned calm, but while we were still trying to persuade ourselves that the tragedy was overand the volcano had exhausted its bowls, at about 8 o'clock, we heard a crash and then I noticed that smoke was rising from the point of the island that looks towards east.

The smoke spread very gradually as far as the crater of the volcano, while there were many whiffs issuing from points in the direction of another headland. I realized that the island had opend in these places and fearing that, if a crater should open below the water, an explosion might follow, much more formidable than the preceeding ones, I mounted a horse and retired permanently to the Sanctuary of Caysasay.

Between 3 and 4 o'clock in the afternoon of the said 29th, it began to rain mud and ashes at Caysasay [12 miles from the volcano] and this rain lasted three days. The most terrifying circumstance was that the whole sky was shrouded in such darkness that we could not have seen the hand placed before the face, had it not been for the sinister glare of incessant lightnings.

Nor could we use aritifical light as this was extinguished by the wind and copius ashes which penetrated everywhere. All was horror those three days, which appeared rather like murky nights and we did not occupy ourselves with anything but see to it that the natives swept off the roofs the large quantities of ashes and stones which kept on accumulating upon them and threatened to bring them down upon us, burying us alive beneath their weight. But fearing that even these precautions might prove unavailing, we 3 Europeans - viz.

Prior, the Alcalde, and myself - the only ones who were at the time in the Convento of Caysasay, took refuge on the landing of the stairs; as the safest place, and awaited there whatever God might dispose with regard to us. To all this was added incessant thunder and lightning, and it really looked as if the world was going to pieces and its axis had been displaced. During the night of the 30th we had not a moment of repose, as every moment we heard the loud crush of houses collapsing under of stones, mud, and ashes piled upon them, and feared that the turn of the convento and the church of Casasay would come in next.

Shortly before daybreak of december 1 there was a tremendous crash as if the house were coming down on our heads: the roof of the apsis of the chruch had caved in! Not long afterward, the roof of ther kitchen gave away with a thud. Both were tile roofs. 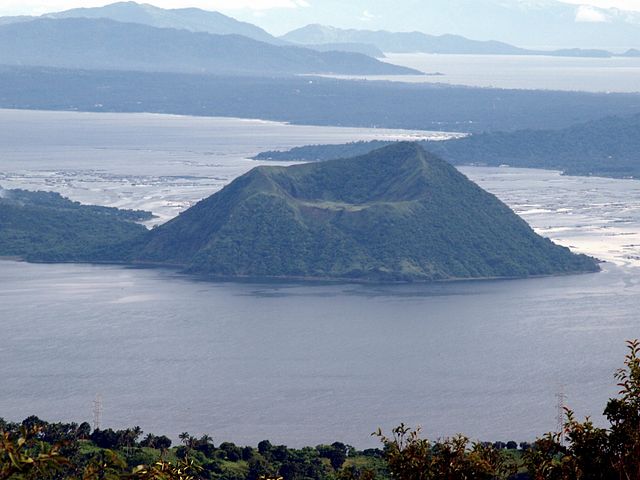 The first of December broke somewhat clear and our eyes contemplated everywhere ruins and destruction. The layer of ashes and mud was more than 5 spans [1. We caused the bulk of the material to be removed, while new continued to fall on that day and the following, on whichlatter the direction of the wind changed, carrying the ejecta toward Balayan. On the 3rd and 4th we had a formidable typhoon, and thereafter the volcano quieted down.

Soon afterward I resolved to visit my town of Taal; nothing was left of it except the walls of the church and convento. All the rest, the government house, the walks of the rope factory, the warehouse, everything was burried beneath a layer of stones, mud, and ashes more than 10 spans [2. I went downb to the river and found it completely filled up, with a boat belonging to the alcalde and many of private persons burried in the mud. After incredible efforts I finally succeeded in unearthing in what had once been the church and sacristy, the chests which contained the sacred vestments and vessels.

Nearly all of them were demoloished by the rocks and beams which had fallenupon them, and filled with foul-smelling mud that had ruined or disfigued their contents. With the aid of some natives of Bauang I likewise recovered some property from among the ruins of the convento. Twelve persons are known to have perished - some carried away by the waves of the lake, others crushed beneath their collapsing houses.

Thus the beautiful town of Taal remains a deserted wilderness and reduced to the utmost misery, while once it was one of the richest and most flourishing places. In the villages to the west of the lake, which were the greater and better part, all the houses have either collapsed under the load of material which had been piled upon them or have diappeared completely, swept away by the waves which in these places were so violent that they dug three ditches or channels, too wide and deep to be forded, and thus rendered impassable the road which joins the town with Balayan.

In other parts of the lake shore have likewise opened manycracks and occurred very extensive slides. The worst of all is, that, the mounth of the river Pansipit having been blocked, the lake is rising and invading the towns of Lipa and Tanauan, both being on the lowest level, and inundating their buildings. All the animals of whatever kind have perished, some by being burried, others by drowning, the rest by starving, as not a green blade remained anywhere.

The same fate as Taal has befallen the towns of Lipa, Tanauan, and so much of Sala as still existed. These towns, together with Taal, lay around the lake, being situated within easy reach of it, and less than one league [4 kilometers] from the volcano. The bulk of the population left this neighbourhood and settled in more distant places. Thus out of taxpayers whom Taal contained formerly, hardly remain in the poorest and least respectable villages, which suffered little from the rain of ashes.

Taal Volcano in the crater after the Jan. 30, eruptio… | Flickr

Thus far good Fr. The towns of Taal, Lipa, and Tanauan were on this occasion definitively transferred to their present sites, a measure , the great prudence of which has been shown by subsequent eruptions. Although this outburst failed to reach either the magnitude or the duration of the preceding, it, nevertheless, proved disastrous to the neighbouring towns owing to the quantity of ashes and pumice stone ejected on the occasion.

In the more immediate vicinity of the volcano there were places where the ground was covered with ashes to a depth exceeding 84 centimeters, and in more distant localities the fall was proportionally heavy. According to an author who, however, visited the volcano for the first time as late as , this eruption profoundly modified the principal crater. He says:. Formerly the depth seemed immense and unfathomable, and at the bottom was seen a liquid mass in continual ebullition.


Volcano Observatory. Historical Eruptions. This earthquake has an epicenter located 8 kilometers northwest of…. November 12, In October , a series of strong shallow earthquakes struck the province of Cotabato and vicinity. November 08, November 04, October 31, Field measurements on 14 November at the western sector of the Main Crater Lake yielded a decrease in water…. November 19, Moderate emission of white steam-laden plumes that crept downslope before drifting west-northwest, east-northeast and northeast was observed.

Sulfur dioxide…. The eruption off Pira-Piraso, or the eastern tip of the island, created a new island. Then came the great day eruption of , the greatest eruption of Taal, which is described below. Taal remained quiet for 54 years except for a minor eruption in Not until March did another big eruption occur. It brought great changes in the interior of the crater, according to chroniclers of that time. After the eruption, the crater had widened and the pond within it had been reduced to one-third and the rest of the crater floor was higher and dry enough to walk over it.

The height of the crater walls has diminished and near the center of the new crater floor, a little hill that continually emitted smoke. On its sides were several wells, one of which was especially remarkable for its size. On July 19, , an eruption of gases and ashes killed all the livestock on the island. From November 12—15, , ashes ejected by the volcano covered the entire island. Another eruption took place in as a result of which a new outlet was formed in the southeastern wall of the principal crater. The last eruption from the Main Crater was in , which obliterated the crater floor creating the present lake.

In , a huge explosion sliced off a huge part of the island, moving activity to a new eruption center, Mount Tabaro.